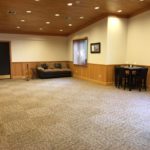 Station 2 originally housed our brush truck as a primary response vehicle, and had varying apparatus assignments until the purchase of a Pierce/PUC engine in 2009. The administrative area and dorm rooms were finished in 2003, and our live-in program was first launched at Station 2 that same year.